Today, Carmen, her sister Lily and I arrived back from the beautiful city of Cajamarca in the Andes of N. Central Peru.  The city has grown a lot over the past decades, mostly because of people moving there to support the local gold mines.  The population is about 250,000 (estimates vary), and the altitude is about 8900 ft. (just high enough to give each of us a little bit of soroche (altitude sickness), in our cases, just a mild headache for 24 hours or so.  (Cuzco at 10,500 ft is a different story..).  Cajamarca is a beautiful city, but its history is soaked in blood and gold, from early days even until now.

It is safe for tourists, and highly recommended however!

We traveled by bus (20 hours, we were delayed about three hours by someone throwing a rock at the windshield of the bus near Trujillo, it was damaged enogh that we had to wait for another bus to take us up into the Sierra).  We took "first class" which allowed us to sleep nearly flat in our seats.  We arrived in Cajamarca about noon.  After checking into our hotel, we went for lunch.  Here is what I had (for ALL photos, you can "click" on the image for a better view): 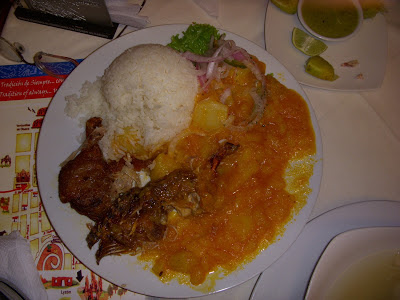 Recognize that delicacy of the Incas?  It is fried "cuy" (guinea pig), the first time I ever ate it.  A potato "guiso" is just to the right.  And Peruvians (even in the mountains) love their rice...

The next day we took a tour to "Cumbemayo", where the Incas and certain Pre-Incan civilations spent some time working wioth stone, both as art and to trasport water to Cajamarca (an important city before the Spaniards came).  Here is a panoramic view of Cumbemayo: 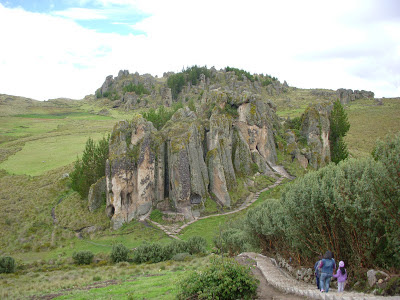 Petroglyphs from a Pre-Incan civilization (they think these are over 1500 years old), they do not have these figured out yet (there is a LOT of ancient Amerinidian remains of all sorts in Peru, they do not even have the Mexican Maya hieroglyphics figured as far as I know...). The easiest to see are those right of and below the center of the picture.  You can kind-of make out the "roof" above, it is rock that has prevented the rain from washing away all of this through the centruries: 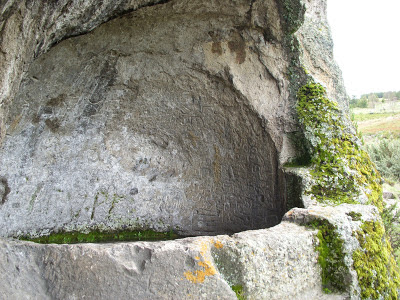 Cumbemayo is at altitude of approximately 10,000´ to 10,500´ depending on who says it, it IS well above the city of Cajamarca.  This next picture shows some clouds coming in, that means rain will be coming soon! March is the height of the rainy season is Cajamarca, from about 1:00 PM to 8:00 PM it rains on and off, sometimes hard. 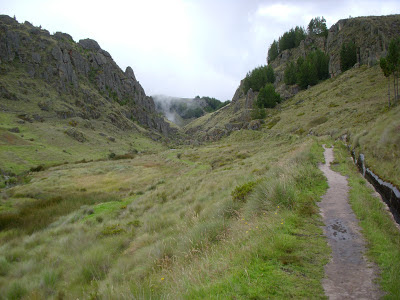 On the way back to the city, I asked our guide to stop so I could take a picture of the ancient and famous "Camino del Inca" (the Inca Highway, note that it could be a little rough as they did not have vehicles, llamas were their beast of burden, each can carry some 15 kg (35 lbs).  This part is no longer used. 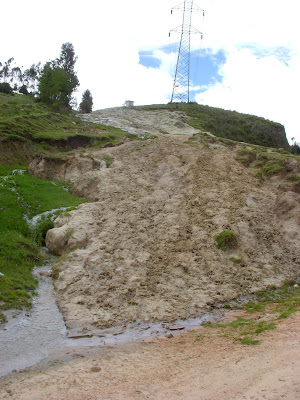 After the tour, we went to their most famous landmark.  This next photo is perhaps Cajamarca´s most famous landmark: the "Cuarto de Rescate" (the ransom room).  The early Spaniards (under the still much-hated Pizarro to this day) had come to Cajamarca a few days ahead of Atahualpa (Atahualpa and his brother Huascar were engaged in a civil war to see who would be king).  The Spaniards captured him, and held him for a huge ransom (it is still not completely clear the chronology AFAIK) in the now famous room.  Here is the entrance: 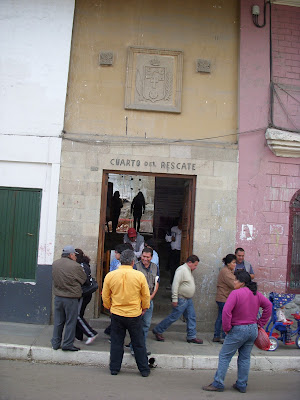 The Inca agreed to turn over gold objects (plates, religious items, decorative artwork, etc. -- the Incas did not use gold or silver for money).  Atahulapa raised his hand to mark the level of the room where the gold would be piled up.  From all over the Inca empire, they complied, it worked out to 5000 kg of gold (worth some $240 million) as well as over twice that volume of silver (12,000 kg (worth some $10 million, all TODAY´S prices).  The picture below was painted somewhat recently (1900s?, I forget), but shows the Inca noting with his hand how high the gold and silver would be piled up.  And after the Incas paid the Spaniards the +/- $250 million worth of gold and silver?  Surprise!  They broke their word and strangled Atahualpa by garrotte...  To this day, most Peruvians still dislike the Spaniards, wait until you go to Cuzco and listen in... 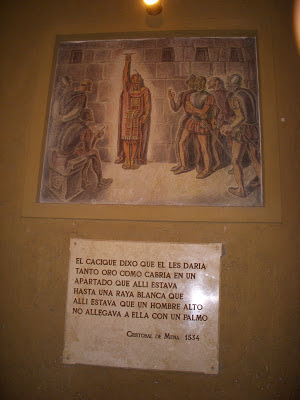 They would not allow us into the roon itself, as it is under restoration (remind anyone of Italy?).  But, here are stonemasons restoring the room, the Spaniards destroyed ALL other Inca buildings in Cajamarca (unusual, because they often recycled Inca buildings into churches and other buildings), note the small rectangle to the upper left (of the door), which marks the level the Incas filled that room: 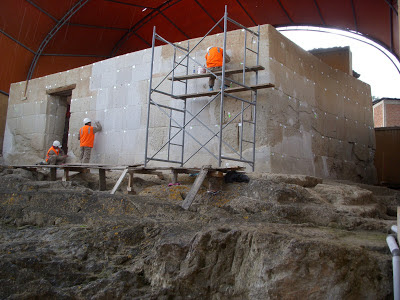 [Sidebar: the Spaniards took a LOT more gold than the $250 million or so from the Incas, these figures are just the RANSOM for Atahualpa, they went on to take/steal MUCH MORE later on]

The view of the "Plaza de Armas" (typically the main square in Peruvian cities and towns) from our hotel´s restaurant: 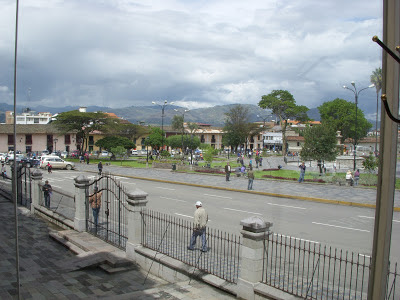 A corner scene, Cajamarca, Peru, note the lady´s hat at the left, each region of Peru has its distinctive local women´s wear... 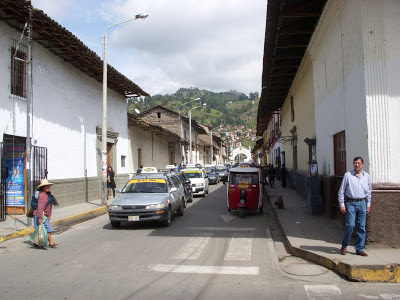 A view up up to the shrine of Santa Apolonia (I do not know the story), I hiked up to the top (where the faint white cross is) to take a few photos.  Going up all of those steps at 9000 feet is more tiring than it looks... 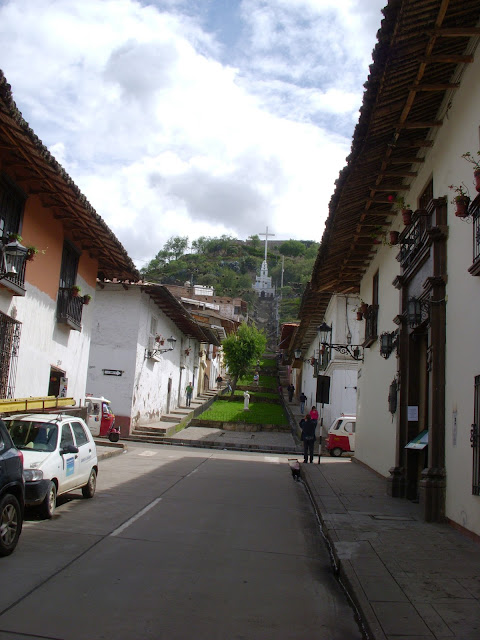 Two panoramic photos from Sta. Apolonia of the city of Cajamarca, which sits in a kind of "bowl" in a valley, the first is towards the east, our hotel (obscure in this photo) is about dead center of the photo: 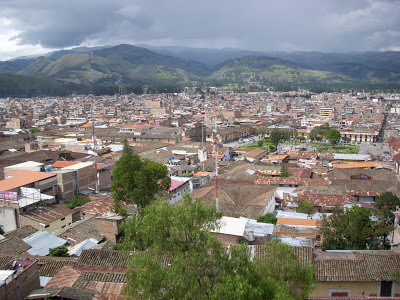 Another panoramic photo, to the southeast, note rain is coming! 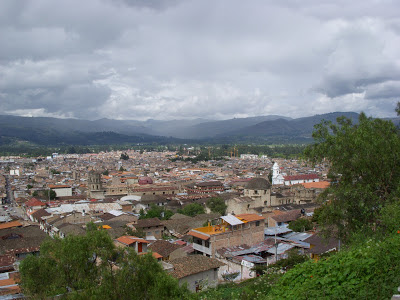 My next two pieces on Cajamarca will be about:

-- Cajamarca and Ameru´s customer there as well as its automotive fleet
:)
-- My interview with the Editor (an excellent and knowledgeable gentleman) of their newspaper!  Part of my interview with Mr. Jaime Abanto was about gold and the impact of the gold mines, present and future...
Posted by Robert Mix at 3:06 PM