One thing I have always wanted to do has been to visit a gold mine.  So, I took advantage of our Montreal trip to come to western Quebec(almost northwestern, it's cold today, maximum was 56 degrees...) to visit Osisko Mining's Malartic Gold Mine, this will be, when completed, Canada's largest open pit mine.  Val d'Or (Gold Valley) is the regional hub city serving the large mining industry here in this part of Quebec, a mining friendly jurisdiction I have heard.

Val d'Or is about seven hours northwest of Montreal, I drove up.  The drive is rather pretty, rolling hills (part of the Laurentian Mountains) with a lot of lakes.  A long stretch of the drive crosses a wildlife preserve (Vérendrye), there are signs saying watch out for moose.  Alas, I saw no moose (mooses?  meese?).  Nor bears.  Nor elk.  Not even a deer.  But, I was driving during the day.  Plenty of aggressive biting insects wherever I stopped however -- it is true what they say, the further north you go, the worse the mosquitos and other biting insects are.

For most of the drive I was able to listen to the radio, Canada has their own news talk stations as we do.  The news of the day (at least on the English stations) is the fairly vast set of corruption scandals, I had heard about none of these in the states.  The recent mayor of Montreal just resigned, soon after the one before did, as well as the mayor of Laval (a big suburb of Montreal).  At least one of these guys had something going on with the Mafia, yes, Montreal has one of the +/- 26 Sicilian Mafia families in the Western Hemisphere (the other one outside the USA is in Caracas, Venezuela, ha ha ha).  Also, Justin Trudeau (son of Pierre) now is going to give some money back to a charity he spoke to (ahh, politics), and there is a Raymond Levine who is caught up in something in Ottawa...  So, Canada is not immune nor pristine either!

Here is the rather welcoming sign to the city limits of Val d'Or! 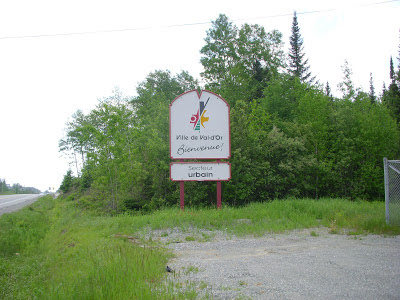 Just as I was arriving into the city itself of Val d'Or (where I am staying), I saw the remains of an open pit gold mine (Sigma) that is no longer in operation.  The below photo was the best I could do, the ex-mine is fenced... 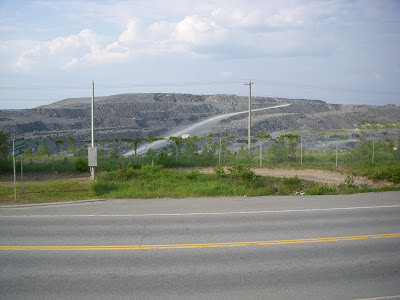 The tourist information place had a boulder in front, yes, with gold flecks in it: 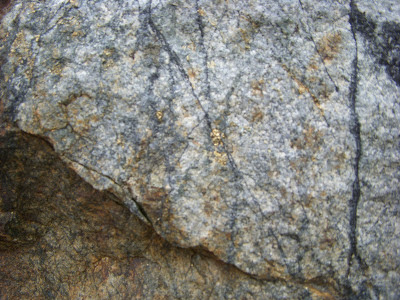 I am happy to report that almost everyone, even way up here, is more-or-less bilingual.  More-or-less being an important word.  I have been practicing my (really bad) French here, asking that they not kick me out of their country just because I do not speak it well...  If they are friendly, I tell them the joke I always tell people about speaking Spanish where I live, that "they" do if you do not...

But, I know that many of my readers continue to believe that I am just a BS-er, so once again I send along an-only-in-Quebec photo of a restaurant familiar to us in America: 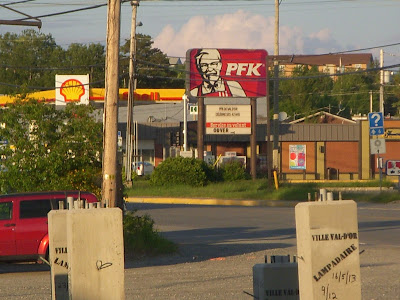 Canada, as you might expect, moves a lot of very heavy things around on its roads.  I once noted (and took a picture of) typical tractor-trailer rigs that you can see in Italy.  But, check out the "30 wheeler" I saw at a truck stop and at various other times, especially hauling timber: 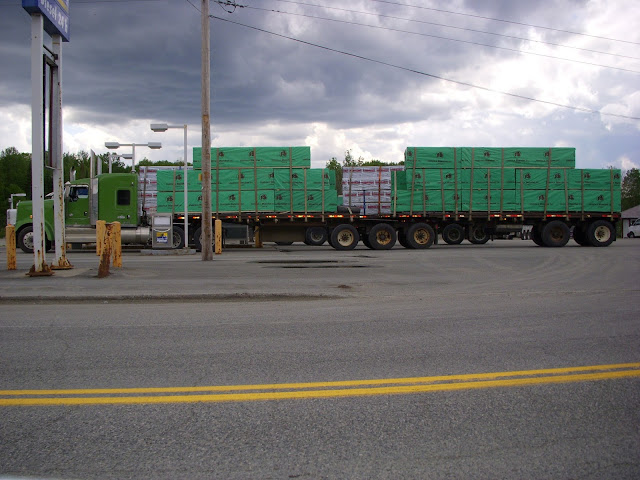 "30 wheeler" actually refers to the number of tires (an "18 wheeler" here has 18 tires on 10 wheels, just to be technically correct here...).  In the above photo you can see the front axle (at the extreme left, one tire per side) and seven more axles (two for the truck/tractor, three more for the first trailer and two more for the second trailer -- all of these with two tires per side, grand total: 30 tires on eight axles).  That's 32 bearings per rig like the above...

There are LOTS of trees in Quebec!  (Quebec is also Canada's largest province, don't believe me?  Check the map...)  So for decades, the lumber business was huge here.  But for various reasons, it is not as big a business as before (perhaps housing having declined as an industry as one?).  I was told by Mr. Massecotte (see next article) that the local gold mining boom came along at just the right time, as many who had been in the lumber business had become unemployed.  But, timber & lumber are still big business here, here is a picture of Val d'Or's local lumber yard (EACOM), note the size of the log handler: 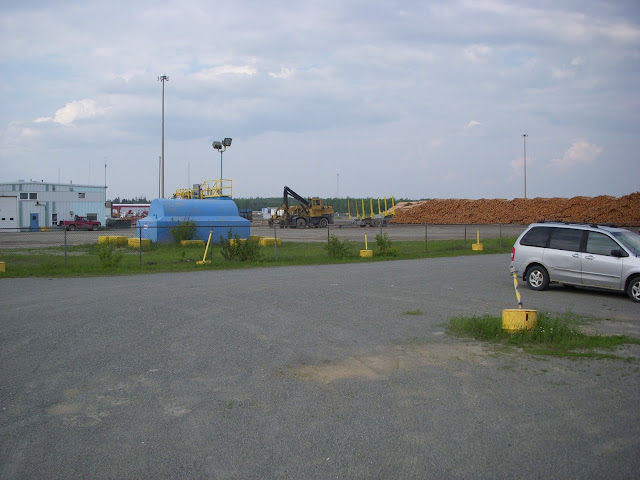 Finally, just before leaving Montreal, I was able to buy a copy of $10,000 Gold, a brand new book by Nick Barisheff.  I could not get this book in the USA, Barnes & Noble offered to order it for me, but I do not like to buy like that...  Mr. Barisheff is Canadian, and lots of people here in Canada are tied to mining so perhaps that was why I could buy the book in Montreal and not at B & N.

I will review the book here at my blog when I finish it (so you already know it is at least good enough for me to want to finish it...).
Posted by Robert Mix at 5:21 PM