I close out our Peru visit with more photos.  I have noted in Google's blog statistics that when I write something (with pictures) about unusual vehicles, I get visitors to my blog from all kinds of interesting places (India, Pakistan, Africa, etc.).  Welcome!

But before I get down to business about vehicles & bearings, I lucked out again at lunch and had "olloquito" (made with Olluco, a potato-like tuber, but smaller, about the the size of a big man's thumb).  If you come to Peru, find someone who can prepare this well!  The little yellow pieces are the Olluco itself, it is laborious to prepare...  Also included are chunks of chicken all on top of rice, mmm...: 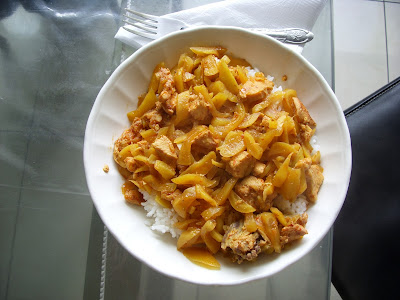 Here are a few more pictures of the northern Peruvian Andes, which in most part are not as cold, high, nor austere as the mountains in the center and south.  En route to Kuelap: 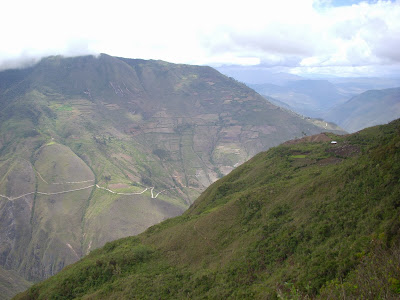 The Utcubamba River (at the bottom, of course, of most of the canyons there), the closest thing to a major river near Chachapoyas, it empties into the Marañon River, which IS big, further down where the Marañon and the Ucayali meet (just upstream of the lowland jungle city of Iquitos), the combined river becomes known as the Amazonas (Amazon). 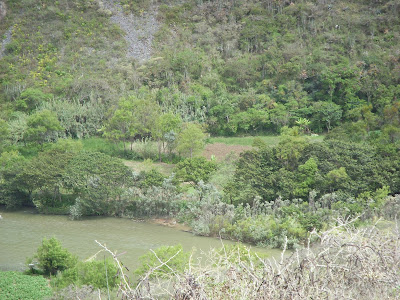 Tour guide Ernesto explaining the horizontal diamond pieces found on only a few houses (Kuelap).  They "think" that these were houses of dignitaries of some sort: 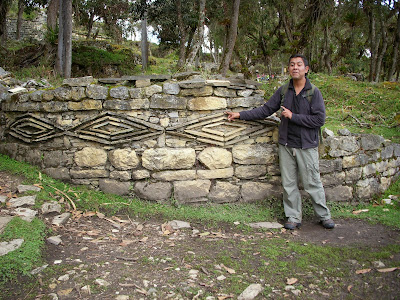 Two llamas at Kuelap.  Peruvians often keep llamas at touristy places for, well, the tourists!  But, they are NOT friendly to strangers, do NOT try to pet them... 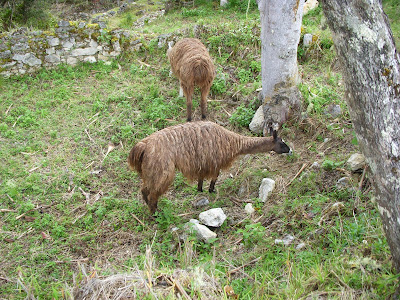 Near Chacha, note you can see tilted limestone formations (white): 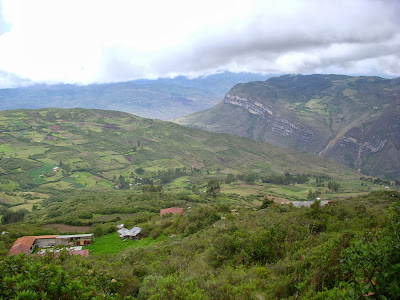 A picture towards Huancas, the small town next to Sonche Canyon: 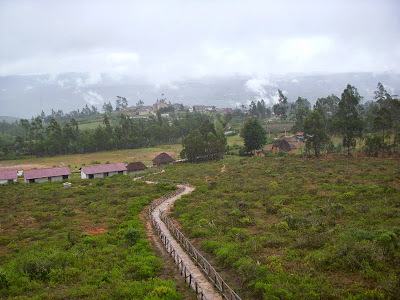 Near Chacha, note that for thousands of years almost every piece of land they would put into food production, they did!  The area was heavily populated when the Spanish showed up... 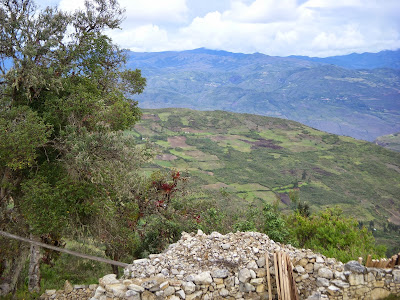 Two pictures of colorful flowers on Cocachimba (elevation 1850 meters, more-or-less tropical), I have NO IDEA what these are. 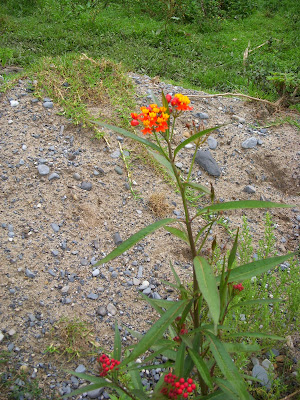 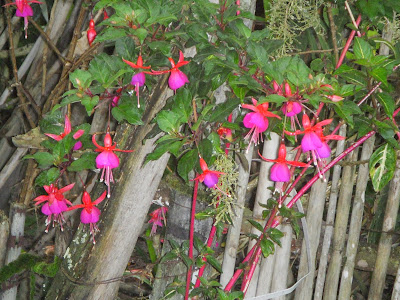 I have mentioned that we have had great luck selling "bocamazas" (hub & bearing assemblies) for some new cars found in Peru.  These are NOT found (to my knowledge) in the USA.  In my March, 2013 article, I showed a photo of our big selling "E90A" piece for Nissan Tiida, well here is the car: 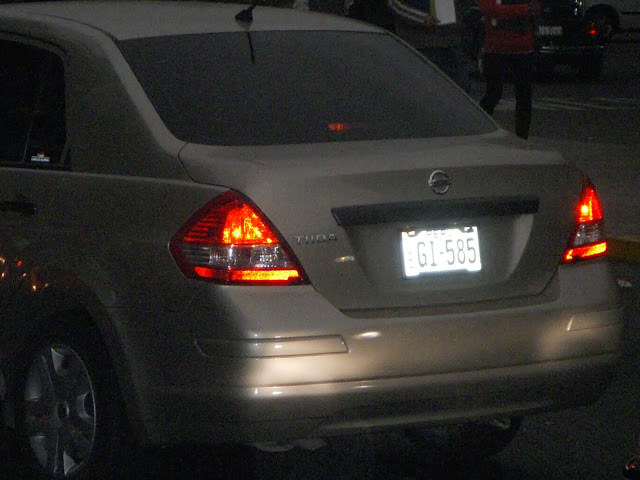 Toyota has a fairly new van out as well, the "new" Toyota Hi-Ace.  It took me a  while to find an example of the new Hi-Ace, Raul suggested that I change location and go to the Panamerican Highway, a little over a block away,  Here it is, kind of spacy-looking (esp. for Peru), this one from above: 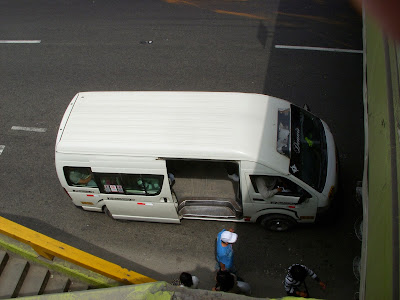 And two more at the loud and kind of menacing bus stop along the Panamerican (ex-photo interpreters often like seeings of interest from different angles...): 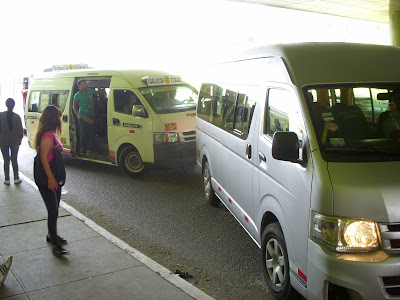 The front wheel uses a "bocamaza" now, rather then a pair of fairly small tapered roller bearings.  Here is our Delfu 54KWH02 for the new Toyota Hi-Ace: 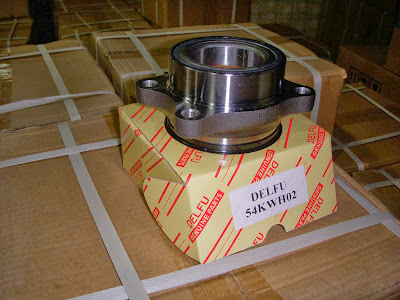 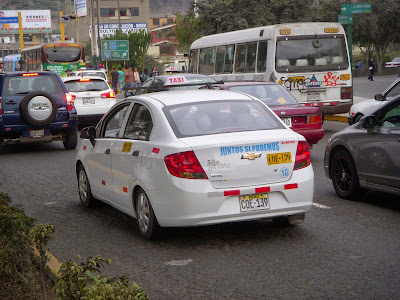 Chinese trucks are all over the place!  Many brands.  There WILL be blood...  JAC is below, but there are two other brands from China with similar names: JBC and JMC!  JAC, however, is by far the largest of those three. 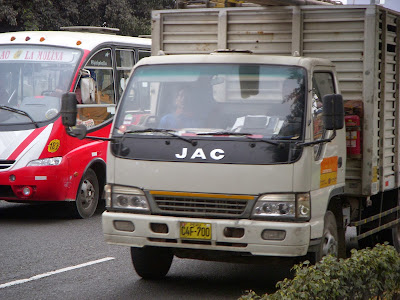 A Yuejin truck (on the PanAm Highway): 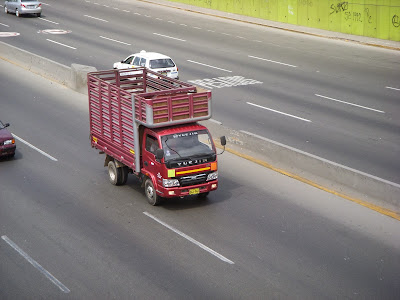 A Yutong bus, Santa Catalina (an urban mass transit (bus) company) just bought 60 new ones of these.  Are you reading this Roberto S.?  We can make some money supplying wheel bearings for this both here in Peru and in Venezuela! 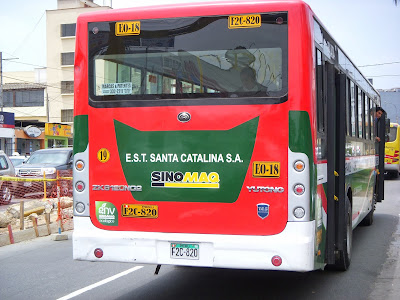 China has NOT taken over all of the market though.  Unicon, a BIG cement company located not far from Ameru has a huge fleet of cement-mixer trucks.  Most are VW and Mercedes (Brazil), but the first one in the photo below is a Mack (now owned by Renault of France), the second is a more typical VW Worker: 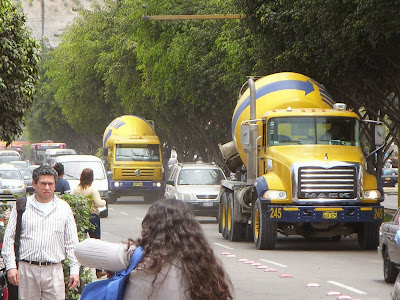 But, companies with big fleets of higher-quality brands do not buy Korean bearings (or even Japanese in many cases).  So, these guys are beyond our reach (as is the HUGE mining industry here in Peru).  ALl of them want SKF or Timken...

One of my favorite places to "hunt for vehicles" is right there along the Panamerican Highway.  Here is a general photo that will give you an idea...: 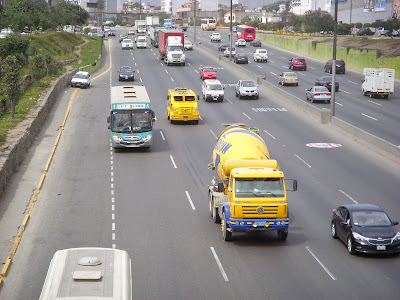 The second yellow vehicle is an armored car (from Prosegur, Peru's leading security company, they provide our alarm system, etc.).

Finally, I found out today that KBC has started shipping new laser-engraved bearings!  The high precision lasers they use cut right into the metal (non-stressed parts along the sides).  They do this to make it harder to counterfeit their bearings (a real problem in our business).  About half of what we received this time are laser-engraved, they now let us know which boxes having laser marked bearings (unfortunately my camera will not take close-ups well enough to show the laser markings on the bearings, but, hey, I tried...), look at the green circles: 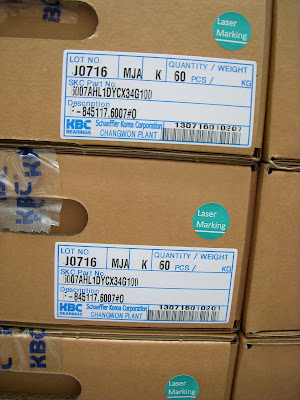