A Pretty Good Day In Lima

Saturdays back in the USA are sometimes a very leisurely day, or a day to run errands to get stuff done that may be hard during the week (food shopping, household chores, etc.).  Every married person knows this.

But, here in Peru, Saturdays are often busy, people doing other things.  Ameru works half the day, and they sold almost $1000 worth of bearings (not bad, Saturdays are usually extremely quiet), most of them to a customer in the provinces (which I like a lot, bigger footprint in Peru, and they pay in advance -- no credit risk!). I did a little bit of "work" but not much, they close at just after noon.

Just before my wife and her sister headed out (that story is coming very soon), I took "Los Lolos" (the family nickname for their parents, a few of you have met them!) to lunch.  Here is my photo of them while we were walking to get lunch this afternoon.  Ana is 83, Eleodoro is 93 (still works outside doing construction and stuff, I have shown him before in my blog).  When they walk together, they walk the "old-fashioned way", she takes his arm.  (Our daughter LOVES this stuff!) 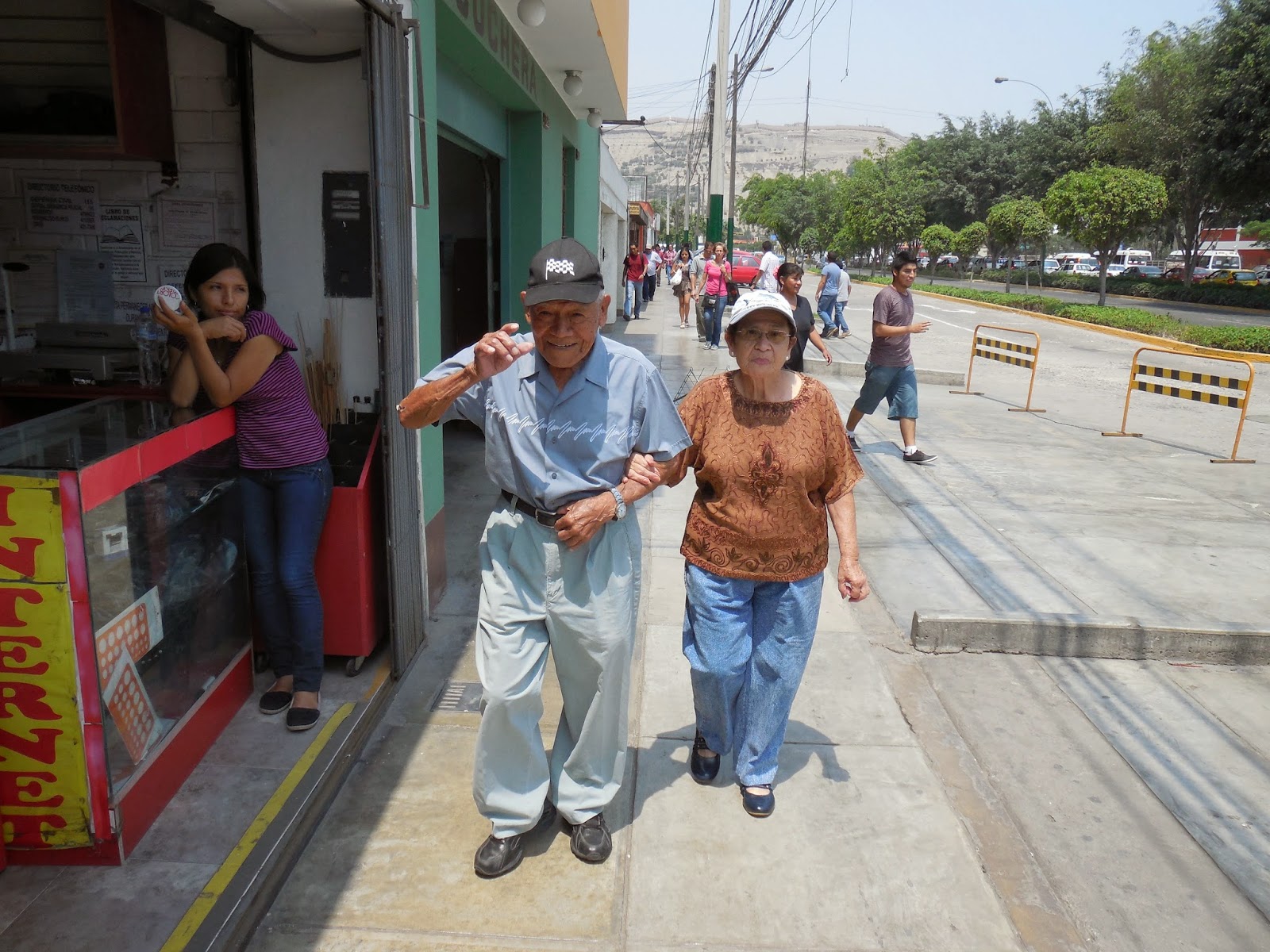 My wife and here sister went off to see the Met!  The Metropolitan Opera of NYC is perhaps the best opera company in the world.  In Lima?  Well, The Met has a special deal, with quality cinemas now in 66 countries (and some 10,000 screens) where they show a live performance on some Saturdays at noon (US ET).  And they have one here in Lima.

(Sidebar: why do I even write here about opera?  Here´s a little secret for you socio-economic climbers out there: the richest and most connected of every city go to the opera, you want to get to know the right people, you go there, source: Esquire magazine.  Also, to make it (as a singer) in the opera, you have an excellent voice and work very hard to get there, only the top succeed, opera singers are not to compared to, say, Peter Frampton...)

My wife is a big-time opera fan, almost a fanatic (one of her friends is a fanatic).  She has been an opera fan ever since she lived in London in the 1970s and 1980s (two hitches there).  When we lived in the DC area many years ago (before we got married and for some 16 years thereafter), she subscribed almost year to go see the opera at the Kennedy Center, a very nice place to see opera.  When we moved to our current city, she has joined their opera as well, but there are fewer performances and the quality is not as good.  I´ll discuss one other drawback of the oepra in our town in just a bit.

The performance this week was Jules Massenet´s Werther, I had never heard of it before today, it is sung in French.  I provide a link below to one of the most well known passages, sung by the very same guy (Jonas Kaufmann) who was singing at the Met, and only the best of the best sing at the Met...

So, my wife and Lily go off to the opera, they did not need to dress up because who goes to the cinema all dressed up (no one)?  I asked my wife to provide information, some of you may like these comments...  First here is a handy table to be able to make a guess as to how YOUR opera experience might go, based on my wife´s experiences in the below venues:


By "the Lima elite", of course I mean mostly the rich and white descendants of the Europeans.

And what do I mean by "poorly behaved"?  Well, everyone who goes to the opera (should) dress up, and be silent during the performances!  After all, opera productions are expensive to put on, and the rich and connected go there, so they should STFU! Sometimes there are quiet passges, and not all people (not even most) know the story lines and so are trying to pay attention while reading the subtitles...  It´s a respect thing.  And in most places they do.  But, not in our city!  The old ladies here talk among each other (or yell at their husbands), rustle papers (opening their snacks), smack their lips while eating and drinking...  Tut-tut!

The audiences in our city make my wife often want to pull her hair out!  It ruins the quality of the experience.  She even wrote to our local opera and suggested that they include an "Opera Etiquette" insert (English and Spanish) like some cities do.  The letter got nowhere, duh, and she is not just a subscriber, but a contributor (albeit a small contributor).

But, today things went very well.  Lily enjoyed the opera VERY MUCH and almost cried (that´s pretty normal at operas among women), she is now an opera fan, neither of them even KNEW that Lima had an HD screen showing it!  Now Lily (who likes culture as well) can see more of the opera as she can, her life will become a little better now,,, "gracias hermana!" (thanks, sister!).

When my wife is away, I am free...  I went to Starbucks (yes, they have one "on almost every corner" here too) and enjoyed a "Mocha Frappucino" (hey, it´s summer and hot now) while reading the News and Business sections of El Comercio, Peru´s biggest and most serious newspaper.  And Starbucks did a good job with my Mocha Frapucciono, the place was also jammed, I got one of the last places to sit down...

After walking back "home" and letting my coffee beverage settle (while wasting time on the Internet, although I DID get a joke out to my Joke List), I asked my 15-year old niece to take some pictures of me while doing my two favorite Tai Chi forms.  This is about the only exercise I do when down here, so I try to go three times a week.  I like the small nearby "Trinitarias Park", in Surco, a municipality of Lima; Tai Chi is much better done outside. 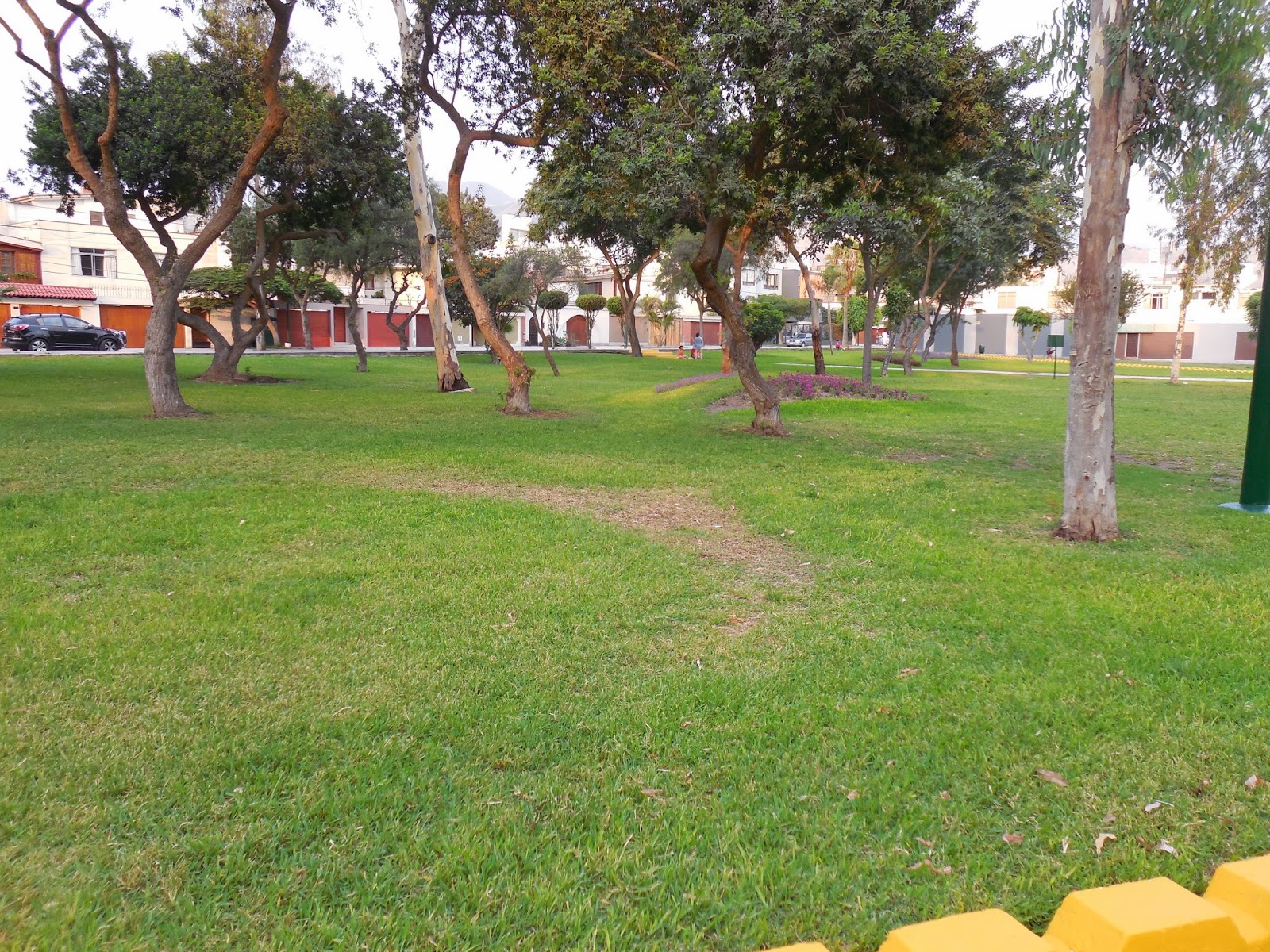 Here are three photos, taken by my niece Viviana, this first posture is from the "Yang Style Long Form", most movements in Yang Style are slow and graceful.  This posture is named (thanks wikipedia!) "Step Back and Ride the Tiger" (Tuì bù kuà hǔ, 退步跨虎): 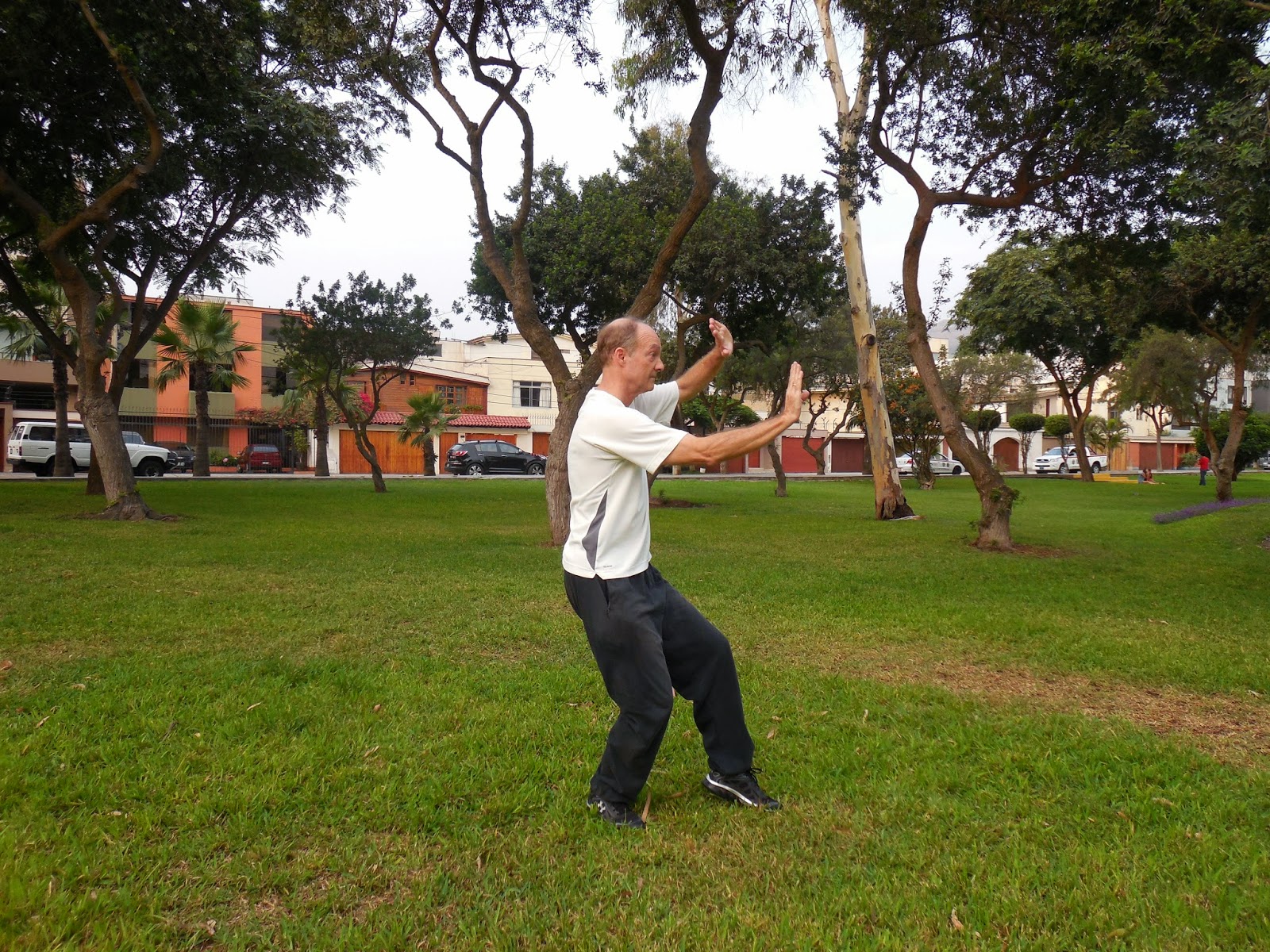 Yeah, I'm getting kind of old and bald, so what are you going to do about it?  Please also note that static pictures show next to nothing about how Tai Chi flows, it is a wonderful exercise, and hey, it might come in handy some someday (it is a legitimate martial art, although almost practioner does it for their health).

This next one is from the more combative style Chen Xin Jia.  This is a more athletic form and is more similar to real combat (like karate's "katas" are).  It is also rarely seen in the USA.  Some of the movements are fast!  I am nowhere near mastering this form (or for that matter any of the others).  This one is hard and dynamic.  Here I am setting up a punch, setting up is slow, but the punch is fast: 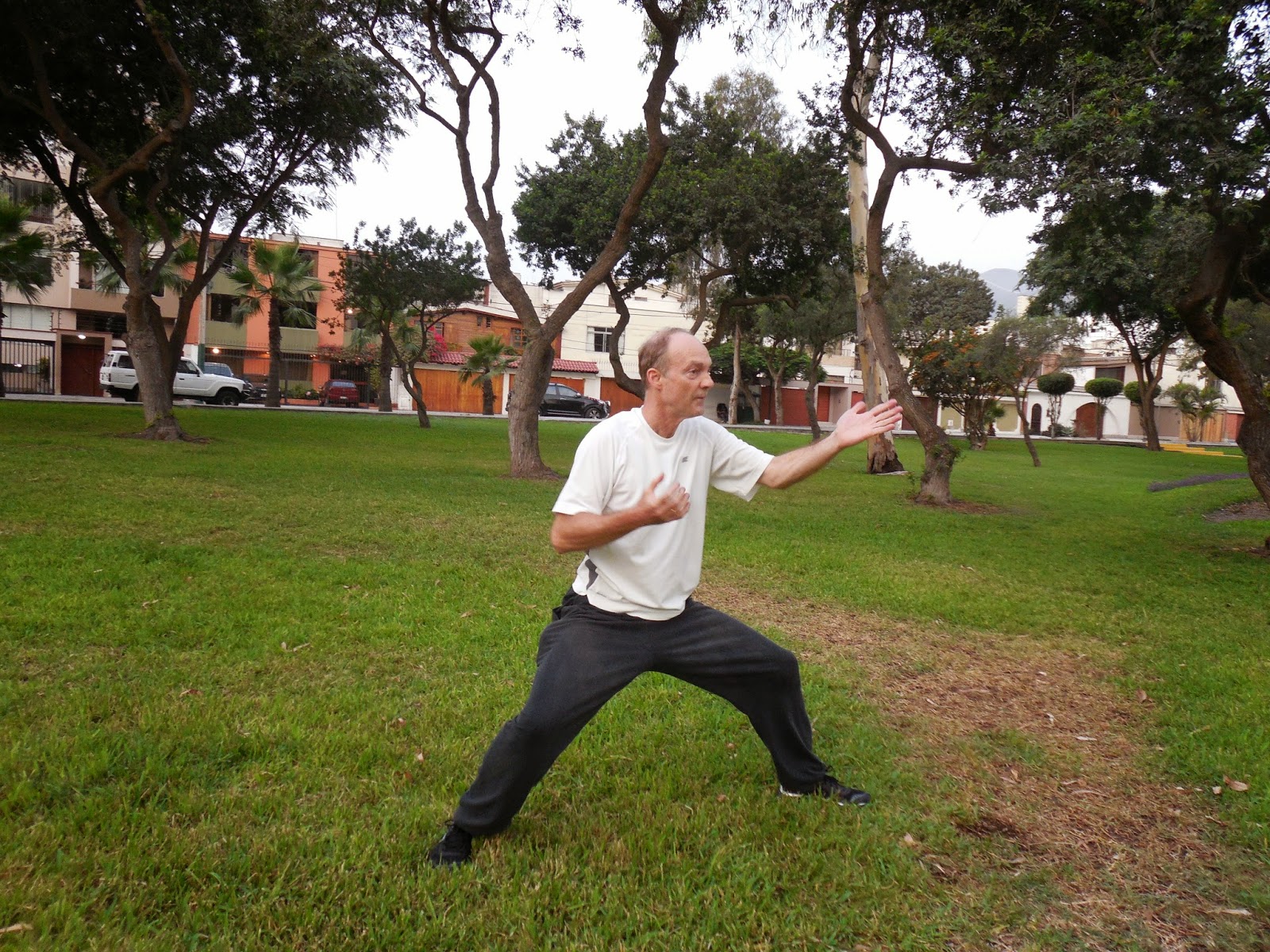 Chen style Tai Chi, near the end of the form, setting up two punches from down low: 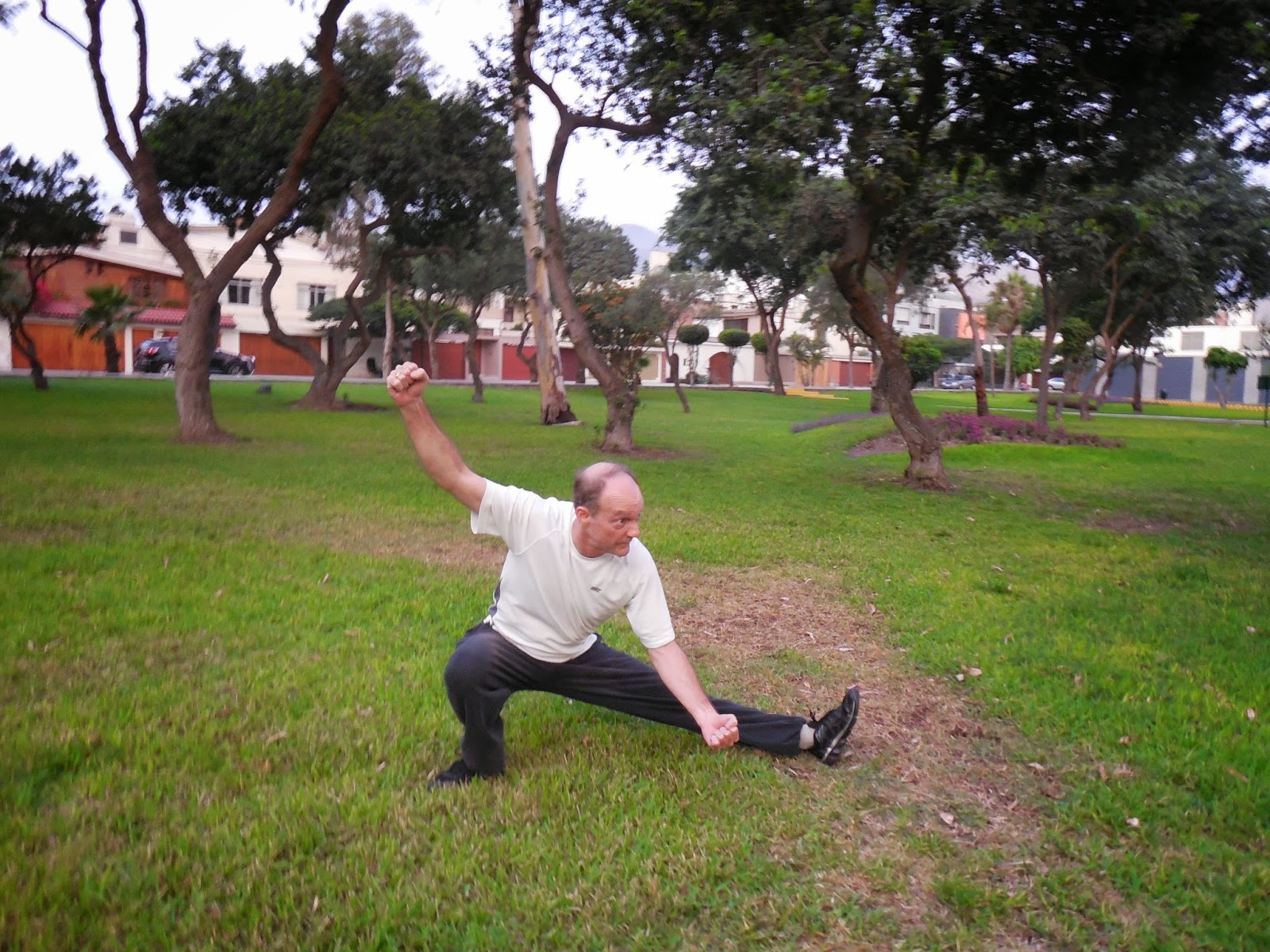 Here is a Youtube of Jonas Kaufmann singing one of the more famous selections from Werther, that my wife and her sister saw today. 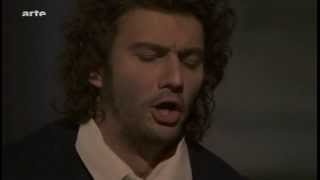 Blessed weekend, everyone!
Posted by Robert Mix at 5:37 PM